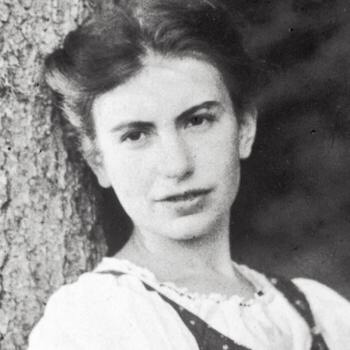 “Instead of turning away from them (war conditions) in instinctive horror, as people seem to expect, the child may turn towards them with primitive excitement. The real danger is not that the child, caught up all innocently in the whirlpool of war, will be shocked into illness. The danger lies in the fact that the destruction ranging in the outer world may meet the very real aggressiveness ranging in the inside of the child.”  ~Anna Freud

“There are few situations in life which are more difficult to cope with than an adolescent son or daughter during the attempt to liberate themselves.”  ~Anna Freud

Anna Freud was a pioneer in the development of adolescent psychology.  She stated that a main human defense mechanism is that of repression (an unconscious process that is created when the young child learns that some impulses, if ever acted upon, could prove dangerous to himself.  Some other mechanisms she described were the projection of one’s own feelings onto another, directing aggressive impulses against the self (such as self-hatred or even physical self-harm), identification with an over powering aggressor, and the complete mental separation of one’s thoughts (or ideas) from their feelings.  Anna Freud founded the Hampstead Child Therapy Course and Clinic, London, in 1947.  She viewed play as the child’s way of adapting to reality.